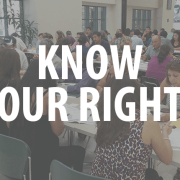 April 25, 2018 – During testimony to the Senate Appropriation’s Subcommittee on Commerce, Justice, Science and Related Agencies today, Attorney General Jeff Sessions announced that he would allow funding for the Legal Orientation Program to continue while the “efficiency audit” is ongoing. This is a relief to the agencies providing critical “know your rights” information to the more than 30,000 immigrants in 12 of Texas’ immigration detention centers. Sessions had previously announced that the program would end on May 1 while the audit took place.

The announcement means that the YMCA International Services will be allowed to continue its legal information program in the Houston area’s three detention centers, reaching more than 6,000 individuals per year. This program guarantees access to accurate and essential legal education for immigrants facing deportation in immigration detention centers, more than 80% of whom are without legal representation. Moreover, these programs improve the efficiency of the immigration court system and ultimately produce a net savings for taxpayers.

Nevertheless, the temporary cessation of LOP funding underscores the vulnerability of low-income immigrants, particularly those in detention and facing deportation.

Kate Vickery, Executive Director of the Houston Immigration Legal Services Collaborative said,
While this is wonderful news today, we worry that we will be facing the same situation in the future if the DOJ’s audit does not support the continuation of the program. As a community, we need to recognize the importance of supporting programs that provide due process and information for immigrants facing deportation. The basic information provided by the LOP program should not hinge on a single funding stream, and the fact that this program could end anytime should motivate us to create additional programs and systems, such as our new Deportation Defense Houston project.

On Tuesday, April 10, 2018, news broke that the Department of Justice (DOJ) is pausing the Executive Office for Immigration Review (EOIR) “legal orientation program” (LOP)  while it conducts an “efficiency audit.” Contracts with the 20 immigration legal services provider nonprofits around the country will end on April 30. This means that, starting May 1, 53,000 immigrants will no longer be provided with information regarding their due process rights, leading to increased deportations and family separations. The nonprofits who provide these services, have a mere 20 days to determine alternative methods to getting vital legal information to detained immigrants as there is little to suggest that this “pause” will be anything but permanent.

Across Texas, five nonprofits provide legal orientations to more than 30,000 immigrants in 11 facilities in the border region, San Antonio, Dallas, and Houston. Through the Legal Orientation Program, unrepresented detained immigrants learn about the removal process, find out about potential immigration relief, discuss their situation with an attorney and, in some cases, obtain referral to pro bono attorneys and other nonprofits in Houston. The Program is administered nationally by the Vera Institute of Justice.

In the Greater Houston Region, the YMCA International Services has been the only provider of legal orientations to detained immigrants since 2007. Through the LOP, they provide legal orientations to more than 6,000 individuals annually in three detention facilities: Houston Contract Detention Facility (Houston); Joe Corley Detention Facility (Conroe); and Polk County Adult Detention Center (Livingston). A new facility will open later this year, also in Conroe. These detention centers have some of the lowest legal representation rates of any in the country: only 27% of the approximately 3,000 detained immigrants have legal representation at any point during their case.

Elizabeth Sanchez-Kennedy, Immigration Legal Services Director, YMCA International Services said,
“Ending the Legal Orientation Program will dramatically decrease immigrants’ access to the information they need to be able to make informed decisions about the deportation process and further reduce the number of immigrants represented in immigration court. Our staff at the YMCA have passionately participated in legal orientation programs for many years and have developed an expertise in navigating the murky system for which there is no guide.”

The Legal Orientation Program was created during the George W. Bush administration as a mechanism to improve immigration court efficiency. The program does not provide direct representation for individuals, but is the primary pathway for detained immigrants to get referrals to attorneys and organizations who can represent them.

Kate Vickery, Executive Director, HILSC, said,
“We believe that it is fundamentally unjust for anyone living in the United States to face a judge without an attorney to help them navigate a complex legal system or to face deportation without ever being informed of their rights and options. It is our assumption that without advocacy, this temporary pause of the program will be permanent, as the current administration has shown little regard for due process and access to legal counsel for immigrants in removal proceedings. The end of LOP will certainly result in a decrease of representation and an increase in unjust deportations. This is another tactic – along with immigration judge case quotas, increased court hearing speeds, and family separation at the border – to deny immigrants access to counsel.”

The LOP program allows providers such as YMCA International Services to have a regular presence in immigration detention facilities, where they can reach out to detainees who have limited English proficiency, financial resources or cognitive capacity who will otherwise be unable to access any legal assistance. Without the EOIR’s LOP, each Houston detention facility will be left to decide whether or not, or to what extent it will allow legal orientations to detainees, diminishing detained immigrants’ only access to legal assistance.

A 2012 EOIR report to the Senate Appropriations Committee showed unequivocally that facilities run more smoothly when people are informed and court dockets move more quickly when people understand their rights and eligibility for relief. Overall, the savings to the government due to LOP was more than $17.8 million, and the system improves efficiencies for immigration judges, ICE, and facility staff while simultaneously increasing chances of detainees winning their case and making dignified decisions.

Members of the Collaborative stand opposed to this latest attack on immigrants and are calling on our community to call members of congress to state their support for the Legal Orientation Program.