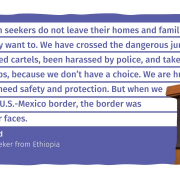 Until the pictures depicting Border Patrol’s abusive treatment of Haitian migrants in Del Rio hit the news in September last year, the plight of Black migrants has been largely invisible in the public consciousness, and it has rarely factored into the public discourse on immigration. Yet, immigration is a Black issue.

Black immigrants make up one of the fastest growing groups in the United States, increasing from nearly 3.7 million people in 2014 to 4.6 million in 2019. An estimated 9% of the 42 million non-citizens in the U.S. in 2014 were Black. Jamaicans and Haitians made up more than one-third of all Black immigrants. Nigerans and Ethiopians are the two largest groups of Black immigrants from Africa. More than half of Black immigrants live in just four states: New York (23%), Florida (18%), Texas (6%) and Maryland (6%), with New York City being home to nearly 40% of foreign-born Black Jamaicans, Miami has the largest Haitian population, Washington D.C is home to the largest Ethiopian immigrant community and Somalian immigrants concentrate in metropolitan areas of Wisconsin and Minnesota. Beside the Caribbean and Africa, Black migrants also come from South America, Central America, Europe, and Asia. Black immigrants from Jamaica, Haiti and the Dominican Republic began immigrating to the U.S. in large numbers in the 1960s; with the majority (63%) of Black African migrants arriving in the U.S. in 2000 or later. More than one quarter (27.3%) of Black immigrants from Africa and the Caribbean obtained Lawful Permanent Status through refugee and asylee adjustment, 10.2% based on the diversity visa program. One in six Black immigrants is undocumented.

The trail taken by Haitians who traverse South America, brave the Darin Gap to reach Panama, travel the entire length of Mexico to reach the Rio Grande and trudge across the river to reach the southern border of the U.S. is the same trail taken by many Black migrants from Africa and elsewhere. For those who survive The Black Migrant Trail of Tragedies, many have been expelled under Title 42 using public health as an excuse, others are stuck in immigration detention and put through fast-tracked removal proceedings without the benefit or opportunity to obtain legal representation. At the peak of the Haitian humanitarian crisis last fall, attorneys reported that they could not locate their clients because the bogus identification numbers randomly assigned to these individuals did not exist in the detainee system. And by the time the attorneys heard about or from their clients, they had already been expelled. Since September 19, 2021, the Biden Administration has spent millions of dollars expelling 156 planeloads of Haitians, totaling about 16,700, back to Haiti, a country deemed unsafe for Americans to visit due to kidnapping, crime, civil unrest, and COVID 19 and where U.S. government personnel are discouraged from walking in Port-au-Prince and other neighborhoods. Among the Haitians expelled, many shackled at waist and wrists en route, 26% were women, and 19% were children, including many infants and toddlers. This image is far from a just and humane immigration system.

Bias in policing has resulted in Blacks and African Americans being arrested at a rate higher than their overall percentage of the population. Civil immigration enforcement that prioritizes those with encounters with the criminal system inevitably impacts Black migrants disproportionately. “Driving while Black,” the 287(g) cooperation agreement between federal immigration enforcement agencies and local law enforcement, and expanded use of “immigration holds” create the detention-to-deportation pipeline. Despite their relatively small size among the U.S. noncitizen population, Black immigrants made up 10.6% of all immigrants in removal proceedings between 2003 and 2015. In 2014, for example, Black immigrants made up 4.8% of those detained during removal proceedings, but they represented 17.4% of detained immigrants facing deportation on criminal grounds. Once detained, Black immigrants are given significantly higher bonds than other detained immigrants similarly situated. For those unable to afford immigration bond, many end up serving the longest time in immigration detention among all detained immigrants and are six times more likely to be subject to solitary confinement.[1]

In the post-George Floyd era when this country is split between those who embark on the journey of racial awakening, making diversity, equity, and inclusion (DEI) training vogue, and zealots who race to ban books from libraries and classrooms, and outlaw teaching Critical Race Theory, it appears that this country is still unwilling to see the deep human suffering and inequities caused by pervasive anti-blackness in our society.  Is this the year when #BlackLivesMatter and #Not1More?