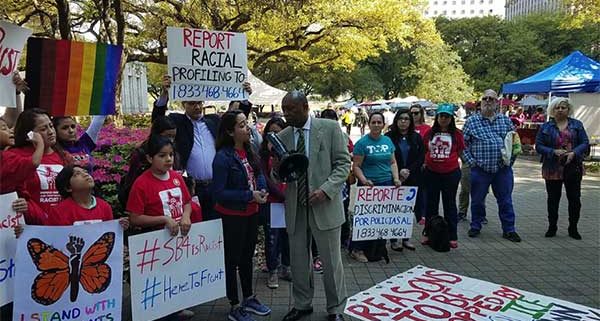 Video of the event can be viewed here.

SB 4 is racist and we will not succumb to this racist law. We are resilient and powerful and equipped to protect ourselves. #HereToFight #SB4isRACIST

Damaris Gonzalez, lead organizer, United We Dream Houston, said:
“This decision, on top of Trump’s decision to kill DACA, is putting our families and communities in danger of more separation from loved ones, further criminalization of the brown and black community, more hate crimes against our people, and more stories like that of Dennis. Dennis was bullied at his high school for being undocumented and when he reported the incident was arrested by HISD police who took him to county jail where he was later placed under ICE custody who now, two months later is holding him in a detention camp miles away from his family. This decision comes to no surprise to us, and our community is vigilant and organized. We know our rights, will defend our rights, and no matter what, we will hold politicians accountable to our community and push for bold leadership to pass local policies that protect our families from separation, expose racial profiling and hold law enforcement accountable. In Houston, the Immigrant Rights hotline (1-833-HOU-IMMI) equips our immigrant communities with tools to fight back, and to help people identify and report racial profiling or violations of civil rights. Texas is our home, we are here to stay and here to fight!”

Natalia Cornelio, Criminal Justice Director with the Texas Civil Rights Project, said:
“The decision is a blow to the civil rights of every Texan. Millions of immigrants and people of color face the prospect of unlawful racial profiling and discrimination. But we are not deterred. We knew this was going to be a long fight when we started and we are prepared to go the distance. This ruling explicitly emphasizes that the implementation of SB4 must still follow the Constitution and is not a blank pass for police officers to ask everyone about their immigration status. We urge community members in Houston and across Texas to know their rights and contact us if they face civil rights violations. At the same time, it is now incumbent of every single city and county in Texas to ensure that they abide by our constitutional principles and take steps to ensure that discretionary arrests do not lead to deportation and the breaking up of families.”

Andrea Guttin, Legal Director for the Houston Immigration Legal Services Collaborative voiced some of the concerns of the immigration legal services community:
“SB4 will decrease access to legal counsel because it encourages racial profiling – leading to more arrests and, subsequently, landing more people in immigration detention facing deportation.  An estimated ten percent of people in Houston’s three detention centers have access to counsel, yet representation is a key factor in winning a claim to lawfully remain in the U.S.”

Mi Familia Vota Texas State Director, Carlos Duarte, offered some insights for local communities:
“We will be making a call to local officials to implement mitigating policies to prevent racial profiling by law enforcement and to ensure that policing to keep communities safe takes priority over immigration enforcement. We need the police to do their jobs, not to act as ICE agents. Latinos deserve equal protection under the law. While SB4 is in effect, our civil liberties and rights are being violated. We urge community members to report all detentions, arrests, suspicion of racial profiling, and other abuses to the dedicated Immigrant Rights Hotline. More than anything, however, go out and vote. This law was created by and upheld by elected individuals – but we can elect who determines which laws should be valid. We have rights that need to be respected and our line of defense is at the polls.”

Rev. Felon Bonner II, TOP Board Member, said:
“SB4 is is an affront to justice and progress. SB4 is white supremacy codified. SB4 is more people of color behind bars, more families separated, more of us living in fear. I don’t want that. I don’t want that for my state, for my city, for my neighbors, for my community. Let us not forget that SB 4 became law almost solely on the votes of white men who have never been harassed by police because of the color of their skin. It is these same white men who routinely attack women’s health care, are constantly trying to pass laws that discriminate against the LGBTQ community and have done nothing to protect Black lives. But we, the people of Texas, will not be coerced or intimidated into being a party to their campaign of hate and division. We will not let their dog whistle politics that aim to criminalize and marginalize people of color go unanswered or unchallenged. We will continue to fight them whether it’s in Austin or New Orleans. We will continue to organize. We will rise! We will win!”

Since the law was introduced last year, undocumented youth, families, allies and thousands of brown and Black immigrants, families, and allies took over the State Capitol in Austin to fight back, saying, “SB 4 is Racist!” Today, they continue to fight to protect Texas families from the terror, instability, and fear white supremacist lawmakers have forced on communities of color.

In Houston, community members can learn more about defending their rights, access free and low cost legal services, and find ways to fight back against deportations by calling 1-833-HOU-IMMI (468-4664).