Blog - Latest News
You are here: Home1 / Research2 / A National Study of Access to Counsel in Immigration Court / Events3 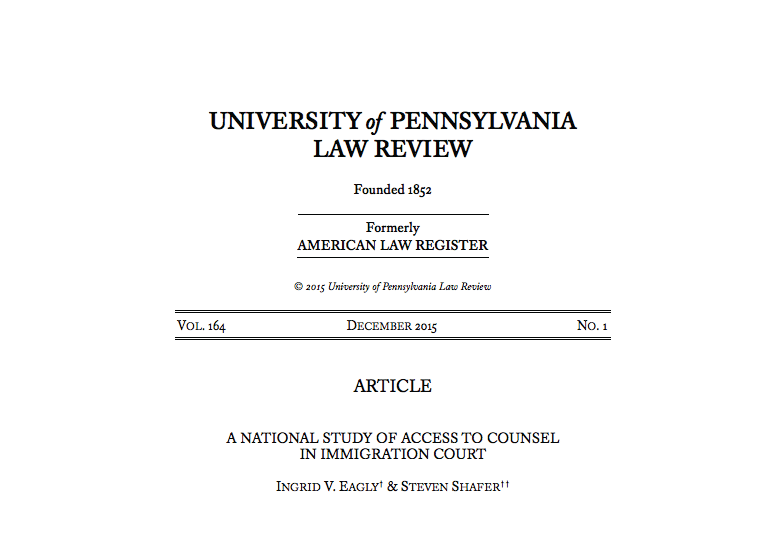 A new immigration representation study by National Civil Right to Counsel (NCCRC) participant Ingrid Eagly (UCLA) was published in December, 2015 in the University of Pennsylvania Law Review. The title of the study is “A National Study of Access to Counsel in Immigration Court.”

Although immigrants have a right to be represented by counsel in immigration court, it has long been the case that the government has no obligation to provide an attorney for those who are unable to afford one. Recently, however, a broad coalition of public figures, scholars, advocates, courts, and philanthropic foundations have begun to push for the establishment of a public defender system for poor immigrants facing deportation. Yet the national debate about appointing defense counsel for immigrants has proceeded with limited information regarding how many immigrants currently obtain attorneys and the efficacy and efficiency of such representation.

This article presents the results of the first national study of access to counsel in United States immigration courts. Drawing on data from over 1.2 million deportation cases decided between 2007 and 2012, we find that only 37% of all immigrants, and a mere 14% of detained immigrants, secured representation. Only 2% of immigrants obtained pro bono representation from nonprofit organizations, law school clinics, or large law firm volunteer programs. Barriers to representation were particularly severe in immigration courts located in rural areas and small cities, where almost one-third of detained cases were adjudicated.

Moreover, we find that immigrants with attorneys fared far better: among similarly situated removal respondents, the odds were fifteen times greater that immigrants with representation, as compared to those without, sought relief, and five-and-a-half times greater that they obtained relief from removal. In addition, we show that involvement of counsel was associated with certain gains in court efficiency: represented respondents brought fewer unmeritorious claims, were more likely to be released from custody, and, once released, were more likely to appear at their future deportation hearings. This research provides an essential data-driven understanding of immigration representation that should inform discussions of expanding access to counsel.