The Help Desk provides one-on-one consultations and legal advice for immigrants in removal proceedings at the Immigration Court in downtown Houston. Services include screenings and advice, making referrals to partners for full representation, and providing pro se assistance on brief case matters, such as basic motions to reopen, motions to change venue, and change of address forms.

This project began in 2016, when Human Rights First and Tahirih Justice Center began providing free consults to asylum-seeking families in removal proceedings (unfortunately, HRF closed their Houston office in 2019). In 2019, the Immigration Court Help Desk was expanded to include Catholic Charities Cabrini Center and the YMCA International Services. In 2020, it expanded again when BakerRipley and RAICES joined. Shortly thereafter, Courts closed due to the COVID pandemic and the project has been suspended until courts reopen.

Deportation proceedings are considered civil—not criminal—and thus the constitutional guarantee of the right to counsel under the Sixth Amendment has not been applied to immigrants facing deportation. There is no public defender system for the immigration court system. Generally, only the detained non-citizens who are able to afford private attorneys are able to secure representation, while most low-income detained persons appear in immigration court unrepresented.

For fiscal year 2018, only 31% of non-detained immigrants had legal representation.

Multiple studies have shown that having legal representation dramatically improves the chances of winning your immigration case. Immigrants who are represented are much more likely to win their cases than those without lawyers, and by a staggering margin – a study of the New York Immigration Family Unity Project found that 48% of their clients will gain the right to stay legally in the U.S. This is a 1,100% increase from the 4% success rate of unrepresented cases before the project (Vera, 2017).

It is fundamentally unjust for anyone to face a judge without an attorney to help them navigate a complex legal system. There is no due process when thousands of people are deported every year without the opportunity to present their case without a lawyer.

The Immigration Court Help Desk is a free walk-in service that assists immigrant in removal proceedings on a first-come, first-serve basis.

During COVID, the Help Desk is CLOSED. Please call the Immigrant Rights Hotline for a referral to a legal services providers: 1-833-468-4664 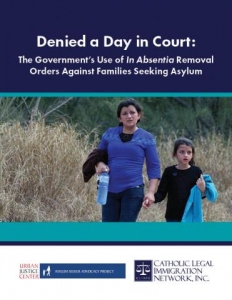