You are here: Home1 / Asylum2 / HILSC Responds to Trump Raids 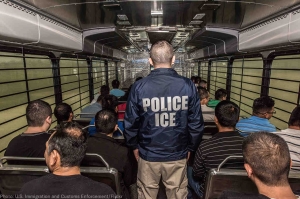 The Houston Immigration Legal Services Collaborative condemns the administration’s threatened raids of immigrant families in Houston and around the country. Raids and deportations separate families, which destabilize communities. The Trump administration plans to begin raids this Sunday, July 14 and continue through July 18.

We urge anyone who has a relative arrested or who witnesses a raid to call HILSC’s Immigrant Rights Hotline at 1-833-HOU-IMMI (1-833-468-4664). Callers to the hotline will get referrals to immigration lawyers. The hotline also informs callers of how to assert their rights – from keeping their doors closed to ICE unless there is a warrant signed by a judge, and declining to answer questions about their place of birth or current immigration status. The hotline will be operating on Sunday, July 14, in addition to its regular operating hours Monday through Friday, 9am to 5pm. Messages left during evenings or weekends will be returned within 24 hours.

Reports indicate that ICE will focus on 2,000 people with final orders of removal from cases that began last September – of these, approximately 80% were ordered deported because they did not show up to court, most likely because they did not have notice of their court dates.

Immigrants facing deportation show up for their court date. The raids are targeting asylum seeking families who were on a “rocket docket,” which often did not give people notice to show up in court, told them to appear for dates that had already passed, or gave them dates the court was closed. The ACLU has filed a lawsuit alleging widespread bureaucratic errors and even deliberate misdirection in some cases.

In addition to these due process concerns, ICE relies on a combination of tactics – including lies, threats, and the use of force – to obtain a person’s “consent” to enter a home. ICE rarely gets warrants signed by a judge, instead relying on their own administrative warrants, which constitutionally do not give ICE enough power to enter a person’s home. Raids often occur before dawn, with ICE officers brandishing weapons.

“These families are being targeted for deportation without notice of their court dates, without access to legal counsel and without an opportunity to fairly present their case before an immigration judge. These families have been denied their constitutional rights to due process. Further, ICE increasingly apprehends other people in these “targeted” raids including those with family members — particularly children — who are U.S. citizens, green card holders or have other types of legal status in the country,” said HILSC Legal Director Andrea Guttin.

We urge Houstonians to ask City and County leaders to contribute to tax-payer funded deportation defense for our friends, neighbors, and community members. Houston, the most diverse city in the United States, has one of the highest rates of deportations – in fiscal year 2018 alone, ICE deported 15,899 people from our region. Other major American cities such as Chicago, Los Angeles, and New York, however, have contributed millions to local legal defense funds to prevent deportations. Other Texas cities, like Austin and San Antonio also fund deportation defense.

For more information about the Immigrant Rights Hotline and to download badges to share on social media, visit houstonimmigration.org/hotline 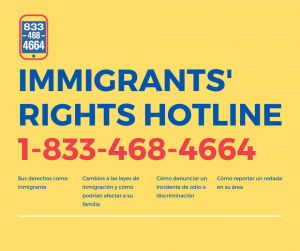