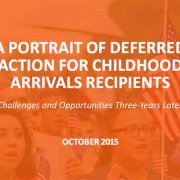 United We Dream released “A Portrait of Deferred Action for Childhood Arrivals Recipients: Challenges and Opportunities Three Years Later”, a survey first featured on Vox, of more than 1,750 immigrant youth with DACA.

In 2012, after a campaign led by immigrant youth, President Obama announced DACA, a program that currently protects more than 700,000 people from deportation and provides them 2-year, renewable work permits.

This survey is one of the largest of its kind, and it takes an in-depth look at life with DACA. The results show that DACA recipients have made great strides and are often the bedrock of economic and social support for their families. They do this while still struggling to find economic opportunities and the tools and information they need to navigate health care, workforce, financial, and educational institutions.

Among the key findings:

United We Dream is the largest immigrant youth-led organization in the nation, a powerful nonpartisan network made up of 55 local groups in 26 states. UWD organizes and advocates for the dignity and fair treatment of immigrant youth and families, regardless of immigration status. UWD seeks to address the inequities and obstacles faced by immigrant youth and believes that by empowering immigrant youth, it can advance the cause of the entire community—justice for all immigrants.

Learn more about UWD at www.unitedwedream.org.